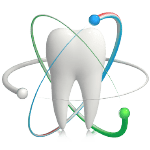 We need to promote the method. The best way to remember sector is to always follow the same  pattern and this manner. It must be made 1 per day. The teeth are cleaned one after another.  For each dental arch, brushing starts with the outside of the last tooth on one side and ends on  the inner side of the same tooth on the same side. For reasons of efficiency (gain automatic),  brushing must be done in the same way each time:

3.  It must, in any case, rinse the mouth after brushing the risk of losing the benefit of fluoride in  toothpaste;

4.  Always red to white.  The jaws are processed one after another, brushing starts with the last tooth on one side and  ends on the opposite side.  For reasons of efficiency (gain automatic), brushing must be done in the same way each time:

1. Upper jaw, cleaning occusales side (the side which chews):  The brush is raised at the last molars straight and moves to the left last molars conducting  movements back and forth from front to rear (amplitude equivalent to two teeth, make the  movement three or four times a group of two teeth),

2. Upper jaw, cleaning sides: plays later, the brush is laid across the gums and teeth; the wrist  turns to perform a movement of roll down. The gesture is repeated three or four times. Note that  we still leads the gum to the tooth (from red to white) to hunt the deposit plaque that forms the  crown of the tooth and between teeth (the reverse movement back tabling this). Then we go to  the following teeth to finish on the opposite side. Arriving at the opposite side, the brush goes to  the palace and performs the same gesture in closing its starting point. Cleaning or Palatine sides  lingual incisors is tooth by tooth, taking his brush vertically (the curvature of the arch does not  allow for effective action, horizontal brush)

Take Appointment  now  !  Or ask for a Free Quote

Our site has no external funding and does not accept or receive any funding from advertising.
This website is certified by Health On the Net Foundation. Click to verify.
This site complies to the HONcode standard for trustworthy health information: verify here.
©COPYRIGHT 2005-2011